“Routetitan is so easy to use that anyone can effortlessly plan the most efficient delivery routes. With the dashboard, I have a clear overview of all the routes and the exact arrival times. When customers ask me where their order is, I can easily share all the relevant information with them.” 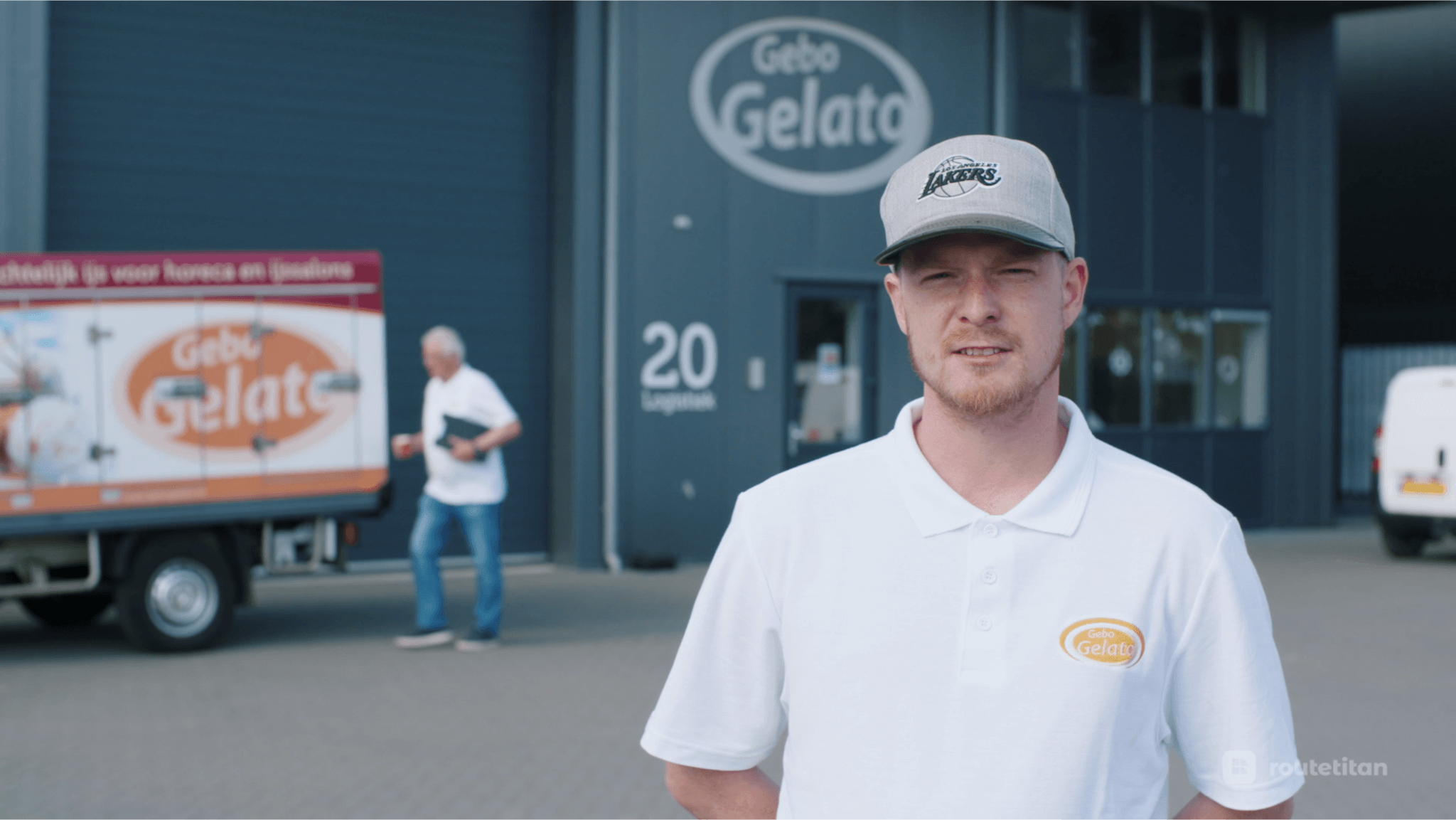 "With Routetitan, we can quickly plan optimized delivery routes."

Gebo Gelato was founded by the ‘Both Brothers' - Henk, Joop, and Piet - in 1950. Having previously started a dairy business, Piet saw already before the Second World War a great opportunity in selling ice cream and chips. After the war ended Piet went to work and he turned out to be a talented ice cream maker. Gebo Gelato expanded rapidly with new outlets and many mobile ice cream trucks.

In addition to selling directly to consumers, the decision was made to manufacture ice cream for third parties as well. This turned out to be a huge success: Gebo Gelato has presently expanded into the largest ice cream supplier in the Netherlands. Everyday artisan Italian ice cream is transported from a brand new modern ice cream factory in Oud-Beijerland to catering and ice cream parlors.

Having at present around 150 addresses to which ice cream is being delivered every day, the need for a more efficient planning of routes developed. Robin Bal, the logistics planner of Gebo Gelato, was sometimes overwhelmed by the increasing demand and the new addresses that were added to the routes. We talked to him about how Routetitan has been a real game-changer at his work.

Robin, can you reveal how you were planning the delivery routes in the past?

“It was great that the company grew so fast, but I was getting more and more stressed out by the increasing list of addresses. Before we started working with Routetitan, it went like this: we divided the orders that came in, into separate areas, so for example Utrecht 1, Utrecht 2, and so on. I entered the area names into Google Maps and that's how a route was determined. But that was not a very efficient route, so then I still had to reorganize that, which was a bit of a brain teaser and quite time-consuming. There were so many addresses that I didn't have time to enter all the street names, so when planning the route, I didn't even know whether an address in Utrecht was in the city center or on the outskirts of Utrecht. I did all the planning by the end of the day so that the drivers could start their journey the next morning. But in our industry, a lot of orders come in during the evening, and then I had to start puzzling again. That was very stressful and I took that home with me. My colleagues in the production department saw that I was under a lot of stress and started looking for a way to plan routes on the computer more efficiently and came up with Routetitan. My boss still had to be convinced and I'm not all that adept with computers either, but especially my colleague Edwin pushed this plan and created a useful Excel template for me, which makes it a breeze to plan routes."

Can you explain in simple terms how you are using Routetitan?

“When orders come in I enter them into our Exact accounting software. That list of orders is then exported into my Excel template for Routetitan. I open Routetitan and upload the Excel file with all those orders. With one push of a button, Routetitan then creates the route for the driver, with a timestamp of each stop and the exact address and all I have to do is give that itinerary to the driver. We have slightly changed the working method because a lot of orders still come in during the evening. We start a little earlier now and plan the routes in the morning. That way we can include everything and stay on schedule, instead of running behind all the time. What’s really a big advantage is that Routetitan takes into account the opening times of customers we deliver to and also indicates whether or not we have to offload at an address that differs from the billing address. It sounds quite simple, but when it's all done by hand, it really takes a lot of time.”

How would you describe Routetitan in three words?

“User-friendly, clear, and reliable. Routetitan is a user-friendly application for planning routes, even if you are not all that proficient with computers. While looking for good software, we also sometimes used a free route planner, but those required still too many actions to make it really useful. Every day I am a little bit proud when we succeed in getting all drivers on the road with a fully loaded truck. It is also transparent since you can monitor all drivers, and the software also takes into consideration traffic jams and roadworks, and it will adjust the arrival time. If a customer calls me and asks at what time the ice cream will arrive, I can now very accurately determine that. It used to be quite a large time window which is not very convenient for the customer because someone has to be there to accept delivery. That’s especially important with a product such as ice cream because you cannot just leave it there. We can be reliable because you can actually depend on the software to show you the most efficient route and there are never any bugs or errors when using the software.”

If someone reads this and thinks 'maybe this is something I could use, what would your advice be?

“I guess that if you have 8 trucks on the road with 10 addresses per day each, it already pays to use Routetitan. Some companies have smaller items, and maybe many more packages would fit into each truck or company van. It might even pay off with fewer trucks, but we use quite large ice bins and the capacity of a refrigerated truck is limited. So when you cater to some 80 addresses each day, it's really nice to work with this software."

I presume your boss is also very satisfied with the results?

“Oh yes, he’s come around! Sometimes you have to push a little to improve something. In this case, it was my colleagues from the production department, and I am very grateful to them for that. For me, there is no more enjoyable way to carry out my work as a logistics planner.”

Need a tool that allows you to easily plan, track, and manage your delivery and service routes? Then sign up for a free 14-day trial of Routetitan today!

A family business that has distinguished itself since 1950 with the traditional preparation of Italian ice cream.